The most disingenuous character ever to run for governor of any state. 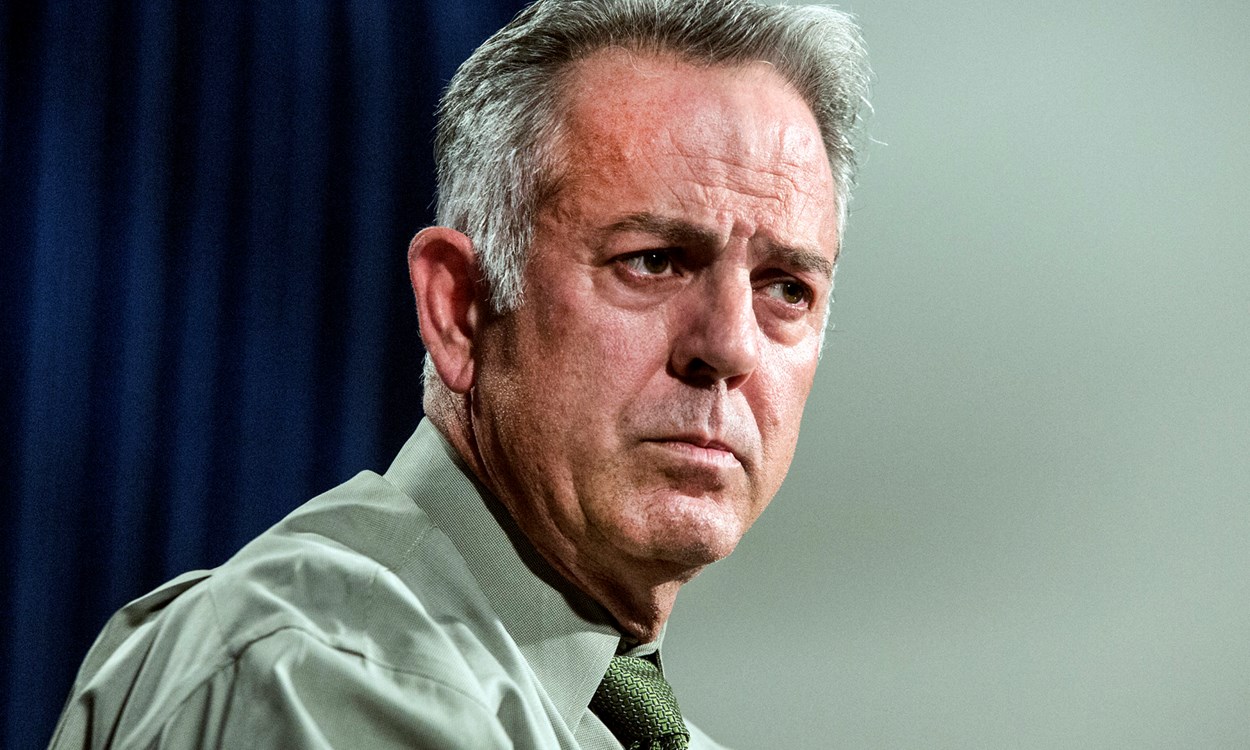 A  sheriff running for governor of an American State?  Is Nevada the deep south - Mississippi, Alabama, circa 1922?   Because that's what it'll be if he wins.

This garbage (a Republican sheriff of a Democrat led state legislature) running for governor is nothing more than a right-wing push-back against the George Floyd protests that circled the globe - their ultimate "blue lives matter"  middle finger to blacks standing strong against racists white cops murdering black & brown people in America with impunity - this is them giving us all - especially black people the middle finger.  And, Is there 'a' (just one) black or brown Nevadan stupid enough to vote for this man?    First and last of all - he'll get ZERO done as governor except having the ability to pardon some murdering racist cop(s) that he used to oversee (that WILL SURELY murder some black or brown Nevadan now that they have Kevin"let me see your twat" MacMahill as sheriff) and what Democrat-led state legislature forwards any proposed legislation by a ultra-nationalist right wing governor unless they've lost their minds?

Important update: June 24 2022 - The Ultra-right wing Federalist Society [led] Supreme Court has overturned the 1973 Roe v. Wade decision.   And now, having 49 years of civil & human rights taken away from every American women by this Federalist Society led court - telling American women that their bodies belong to the state to be governed by each individual state where they live.  What fools vote for a right wing, highly disingenuous person like Joe Lombardo to be governor?  The United Nations along with many human rights orgs (here) have strongly condemned this unconstitutional decision.  We're now to be governed by unelected Federalist Society fanatics (many of whom Senator Catherine Cortez-Masto confirmed for federal judgeships across the nation).  It won't stop at Roe v. Wade.

I was born in 1957, and we had a name for black people who craves such infancy.

Clark County Sheriff Joe Lombardo is 2022 version of Bull Connor (Birmingham, Alabama from 1936-63), Frank Rizzo (Philadelphia Pennsylvania from 1967-71) & Darrell Gates (Los Angeles California from 1978-92) that masks his contempt better than the three of them ever did.  They were all blatant in their hatred of black and brown people.  With him as governor of Nevada we'll witness the same utter madness that those three racists reprobates brought to their city's with near ending  civil & human rights violations by LVMPD.  No other state in the nation would they even attempt something so overflowing with contempt for Black America demanding this murderous, human rights violating garbage end except here in Nevada, where they think they've got black people figured to be this blind, backwards, dumb and distracted - but they've got it/us 'twisted.'  They'll see that on election day.

And all the decent white people who came out here for the George Floyd protects at the height of the COVID_19 pandemic risking their lives - you all know better than to elected this person governor knowing full well what he'll do WHEN (emboldened by the election of a proven degenerate to be sheriff of Clack County) a cop murders some innocent black or brown human being knowing ZERO will be the result of it.  Be reminded the governor of Nevada has pardon powers even if they were convicted of murder - he'd simply pardon them.

On October 1 2017, Stephen Paddock, of Mesquite, Nevada, murdered 60 people (wounded another 411 people) here in Las Vegas at the Route 91 harvest music festival.  it was the biggest mass murder in American history and it happened right here in our state of Nevada.

In the press briefing (this video) you see a totally disconnected, Las Vegas sheriff Joe Lombardo spin a tale that's not true in the slightest of him being hands on - he was anything but 'hands-on'.

Did you hear him say that the Las Vegas Police engage the active shooter?  He, like a liar gone to burning Hell.  The LVMPD did no such thing, in fact they stood in the hallway for an hour and did nothing, zero, it was the Mandalay Bay security guard, Jesus Campos' presence in the hallway outside the door (he was shot by Paddock through the door), keeping Paddock confined to the room he was in - it was his actions in the hallway outside of the room that compelled Stephen Paddock to kill himself not anything that the LVMPD did they [just like the Uvalde cops in Texas did] stood back and did nothing for over an hour.

And now this absolute fraud of a man is trying to piggyback an abject failure of his leadership - a failure that should have been a career ending failure - as their [LVMPD] commander - to the governorship of the state?  Seriously?  How vapid does he think Nevadans are?  This man is a fraud on a level unprecedented.  Republican Nevadans may be this entirely vapid but are we as Democrat Nevadans this vapid?

Joe Lombardo is an extremely dishonest person that shouldn't govern a chicken coop.  And, to add insult to injury he's running a proven equally corrupt sock puppet to step into his former position as sheriff, a first class degenerate name, Kevin McMahill, whose perverted behavior I'll let you review for yourselves (here).  This McMahill is THE poster boy for bottom of the barrel - ANYONE is better then this degenerate assclown (he made the woman swallow crack btw).  The person(s) of color that would give a pico-second of thought to supporting him craves future abuse by LVMPD with him as their leader - he'll sign off an any and everything they do to our community.  The black or brown Nevadan that votes for him is stuck on stupid.  In the TV interview where McMahill tells of the internal affairs interview that he left that had him so flustered that he failed the polygraph test - well, the polygraph test wouldn't have been given on the same day - it would have been set up for another day - he's just a bold faced liar - when he opens his piehole all that comes out are bold faced lies.

Then, in a soft ball interview (at 7:57) on the matter, Lombardo gives a, 'the dog ate my homework 'excuse for it all - it would be laughable were not the matter of such a serious nature.

These two men are the types of immoral degenerates inside of American cop culture going back nearly 30 years here in Nevada - and the reason why the 'elected' sheriff's position should be abolished entirely - the sheriff's position should be like police commissioners in most of  the major metropolitan cities in America an appointee, hired by the County Commission and answerable to them.  This electing a sheriff stupidity goes back to the days of the wild,wild west - no credible democracy should have such political backwardness transpiring in 2022.

In the video [below] on June 21, 2022, the Texas Department of Pubic Safety Director Steve McCraw explains that since Columbine ("the Post-Columbine Doctrine") there is a protocol in place for active school shooters (hence for active shooters in general) in police departments around the country that is to be followed.  Well, it wasn't followed here in Nevada - and no similar hearings to this hearing by the Texas State Senate were held by our state legislature asking the same questions back in 2017 - to ask how did this occur as the LVMPD stood by and did ZERO to interdict Steven Paddock (to "isolate, distract & neutralize" him as Director McCraw phases it).  The very same failures of the Uvalde school shootings happened right here in Nevada - 5 years prior under the leadership of Sheriff Joe Lombardo, yet, he's using it to somehow make himself look like leadership material?  Mind boggling.

Democratic Party Nevadans, reject this man - give Sheriff Joe Lombardo his walking papers - tell him to go open a security guard business - that's about all he has the ability to governor.  And, Independent Nevada voters use your common sense and do the same.   As for Republican Nevada voters, well,  no one should expect Nevada Republicans to use a shred of common sense - common sense ain't too common among them so they'd vote for a proven degenerate in Kevin MacMahill to be sheriff, Joe Lombardo to be governor -  and Trump to be president - again.  Republicans throughout our republic are a breed apart and make no sense, do not try to understand them, do not try to make them understand you - you couldn't do anything that would be a bigger time waster.

And as for me politically-speaking, I'm not going anywhere except to Washington D.C., to obtain long overdue reparations for my people & Native Americans (click the link below).  it's owned and it's gonna be paid-period.  If anyone thinks Nevada's rigged Dominion E-Voting Machines will get rid of me with the flip of a switch they don't know a thing about Allen Rheinhart.  They got me mixed up with weak ass black boi's - wrong psychological profile, wrong black man, wrong century.  The late, great James Baldwin once said, "to be black in America is to live in a constant state of rage."

Until life leaves this very fit body of mine I will until that very last second stay involved in the political dynamics of my city, state and nation - I'll be like that inscription on the top of the James A. Farley Post  Office in Manhattan,"Neither snow nor rain nor heat nor gloom of night stays these couriers from the swift completion of their appointed rounds."