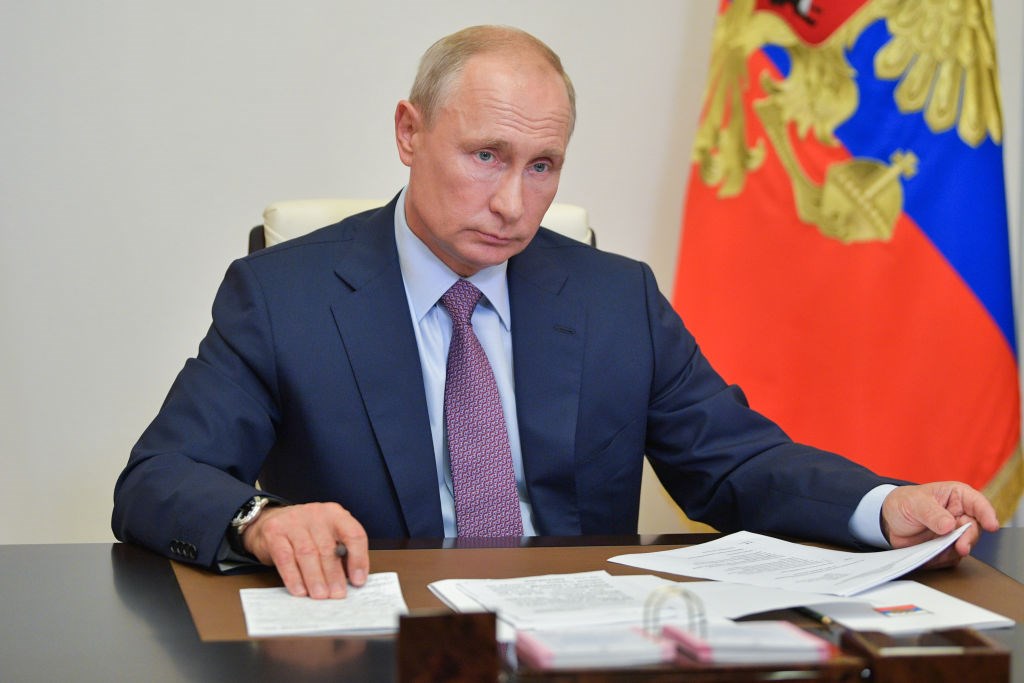 My intent is not to 'sugar coat' Russian Federation President Vladimir Putin and his manner of governing, my intent is to stop the endless dehumanization of the Russia Federation, the proud Russian people and this man who has the unenviable task of fixing an absolute shit-show he inherited from the last leaders of the failed Soviet state (Mikhail Gorbachev) and the 1st President of the Russian Federation, Boris Yeltsin.

After watching the disaster of the Yeltsin presidency, I Personally regarded the next person in line for the job of president to a man/woman sent on a [goddamn] Fool's Errand.

To take on the tasks of resurrecting any failed state, much less the failed state that was the former Soviet state - that he inherited when he became president required a very strong resolve on the part of that person to even step up to the plate. Knowing the complexity of the tasks at hand - after Boris Yeltsin's disaster area of a presidency - Vladimir Putin should be given the respect he rightfully deserves for his accomplishments thus far - with a long way yet to go - he certainly has my respect.
I speak of my respect for governance, not personalities - of which I'm not remotely concerned with when it comes to governmental leadership, be it President Vladimir Putin or any other world leader. The task of any world leader is to better the lives of his/her citizens - it isn't a personality contest.
The Former President & Prime Minister of The Russian Federation, Dmitry Medvedev in this 'must read' highlighted link tells of the many systemic problems within the Russian Federation and what matters need their immediate attention - he speaks specifically of poverty.  And, coupled with U.S. sanctions on their state oil companies and state banks -  that's a monumental effort for the Russian state to accomplish that's trying to get its land legs back from its failed past. Mr. Medvedev is currently Deputy Chairman of the Security Council.

And, unlike the Bolsheviks upon their full takeover of the new Russian state (That was to become the USSR) that refused to pay the sovereign debt of Tzarist Russia - in 1918 that was owed to the rest of the world, the new state of the Russian Federation has paid off each and every external debt owed by the former Soviet Union to all its many creditors and has forgiving billion in debts owed the former USSR by other countries telling them to apply the debt to infrastructure projects within as a gesture of goodwill and to prove themselves credible for future borrowing efforts.  And, in a very short period of time the Russian Federation has amassed considerable wealth with very little external debt.

Vladimir Putin is a man with a very strong sense of himself - of his place in history (of Russian and Ukrainian historical ties) and where he seeks to take the Russian Federation under his guardianship.

Putin's family blood is in the soil of the nation he's tasked with leading - he had two brothers who both died before he was born, one brother (Albert) died in infancy, his other brother (Viktor) died during the Siege of Leningrad (Victor was buried in an unmarked grave) and his father (whose name is Vladimir, too) was wounded in battle during WWII.  Quoting him from his book, "First Person", he said that his mother (Maria Ivanova) was so close to starvation that she lost consciousness and “they laid her out with the corpses” until someone heard her moaning. His father, hospitalized with war wounds, set aside his rations to feed her.

The imperialistic mindset forwarded by those three lunatics are at the root of American foreign policy escapades that have ended in abject failure - as of late the nations of Iraq and Afghanistan.
As Americans we must insist that this unipolar mindset be ended - I wish to go to the US Senate to end this manner of addressing other nations of the world as somehow inferior to us, as if they're children that need to be taught their place by the United States and to stay in it - or else.

At 3:46:31 of this press conference you will hear the final question from a Ukrainian reporter in attendance at which point both Prime Minister Orban's and President Putin will answer his question. President Putin will give a very comprehensive answer regarding the Russian Federation's position on their national security concerns and their position on NATO admitting Ukraine into its fold.

When President Putin speaks of previous obligations signed by the United States he's referencing the Organization for Security and Co-operation in Europe (OSCE) 1999 Istanbul, Turkey Summit and the 2010 Astana, Kazakhstan Agreement  signed by 57 OSCE participating nations - which includes the United States and the Russian Federation as signatories.  The United States and NATO's position is that any nation has the freedom to choose its military alliances - which it's impossible to disagree with, But, these two documents have inter-connecting parts, one mirrors the position of both the United States and NATO, but, the second part is the obligation not to strengthen their security at the expense of the security of other nations.  The principle is clearly and undeniably outlined in the 1999 Istanbul Summit, and reintegrated in the 2010 Agreement:

"The 1999 Istanbul Document states the following (and the Astana Document repeats a lot of it): “Each participating State [of the OSCE] has an equal right to security. We reaffirm the inherent right of each and every participating State to be free to choose or change its security arrangements, including treaties of alliance, as they evolve. Each State also has the right to neutrality. Each participating State will respect the rights of all others in these regards. They will not strengthen their security at the expense of the security of other States. Within the OSCE, no State, group of States or organization can have any pre-eminent responsibility for maintaining peace and stability in the OSCE area or can consider any part of the OSCE area as its sphere of influence.”

Update - on Feb.7, 2022 - at a joint press conference in Moscow with French President Macron, President Putin spoke of a war scenario with NATO  over Ukraine's position regarding Crimea.

When the Russian Federation's position was made clear (in response to the United States position - the exact details of which we've yet to read since it hasn't been made public) to the American ambassador to the Russian Federation, John Sullivan - a Trump appointee, by Russian Foreign Minister, Sergey Lavrov, Ambassador Sullivan said that he went back and re-read both the 1999 and the 2010 documents and he came to a different conclusion....so, basically he's dyslexic or admits not having clear reading comprehension (scroll down to the last question from Elena Chernenko of Kommersant).

It should also be noted that back in December of 2019, Senator Catherine Cortez-Masto voted to confirm John J. Sullivan, another one of Trump's [Republican] Federalist Society reprobates (scroll down to his "biographical information") to be the American Ambassador to the Russian Federation - which seems to be habitual with her regarding Trump appointees of the worse stripe as I have noted previously (here).  Also, Hungarian Prime Minister Orban's spoke of the sanctions on the Russian Federation being being counter-productive as the sanctions have hurt the Hungarian economy more then it's hurt the Russian Federation's economy because it limits the trade between the two nations.