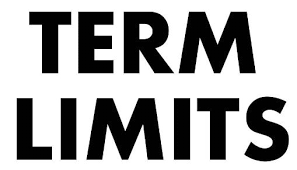 My position on term limits for ALL members of Congress (as well as for governors, Federal & Supreme Court Judges) is that it should be limited to two terms for Senators and four terms for House members.  The problem with that is it would take a constitutional re-write (a 28th amendment/'Second Republic') for that to transpire.  You'd be asking the current crop of career politicians to essentially fire themselves - which we all know is an impossibility - regardless of the majority of the American citizenry being in support of term limits.

West Virginia [Republican] Senator Robert Byrd served as a US Senator for 51 years. Michigan Congressman John Dingell - a Democrat served in the House of Representatives for more than 59 years.   The clear and self-evident absurdity of this is clear to a 10 year old.

I'd vote for a 28th Amendment to show myself the door after two (2) terms, but, outside of a lot of hot air I'd be howling at the moon on the matter. The current resolution in Congress has 94 co-sponsors of both Houses of Congress - ALL are Republicans in the Senate & one (1) Democrat in the House (HJR12 and SJR3).