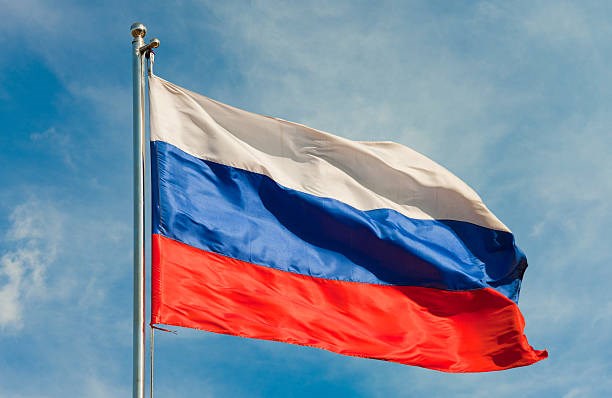 Flag of The Russian Federation

There is no such nation as the Soviet Union/Union of Soviet Socialist Republics/USSR.

It ceased to exist officially on December 12, 1991 - 31 years ago. It dissolved itself under the constitutional provisions of the 1924 Chapter II: Article 4 & 1977 Constitution Article 72 that stated that any Union Republic could leave of its own volition.

The Russian Federation is the largest country in the world (6.6 million square miles).

Important update - May 22, 2022:  I would define these as two very important policy papers that will be respected by the leadership of the Russian Federation - considering their collective backgrounds - both are written by two very influential Russians Dimitri Trenin, published the one in the link above - he is a member of Russia's Foreign and Defense Policy Council, he was also the director of the Carnegie Moscow Center, a think tank until it was shut down in April upon the demands of the Russian government.  The other (here) is from the Director General of the Russian International Affairs Council, Andrey Kortunov.

The dangers of where this is headed (direct military confrontation between the United States and the Russian Federation) is clear and self evident to any half knowledgeable American career foreign service official - so President Biden, Secretary of State Blinken & National Security advisor Sullivan (the architects of this foreign policy debacle) are more than aware of the ramifications of their actions.  Very little of it has any feasible chances of success in the long term, and in the short term it's wreaking havoc on the globe economy as a whole.

The first of the 15 republics that made up the Soviet Union to declare its sovereignty was the nation of Lithuania, followed by Tajikistan, then Kazakhstan under Nazarbayev in October of 1990 (Nazarbayev was declared president in April of 1990)... Soon after other Union Republics were to follow in August of 1991,until on December 12th in a village in Belarus (Belovezh Accords) three of the four original founding members of the Union of Soviet Socialist Republics came together and made it official.

The utter recklessness, either said on purpose to antagonize, a gaff or mere human ignorance by our, Secretary of Defense, Lloyd Austin highlights the destructive mindset of continuous belligerence by our nation towards the current nation of the Russian Federation that has hit the reset button 3 decades ago. They've tried to move on from the years of Stalin, Khrushchev, Cold War antagonisms - but others CLEARLY have not.

The vilification of this word, "Russia" goes back many centuries among the Occident nations  - it isn't a new phenomena.

From The first Tsar, Ivan Vasilyevich (b.1530-84), known to [western] history as, Ivan The Terrible - however, the proper translation is Ivan the Formidable - Ivan 'Grozny' means formidable, not terrible.

We know from our own daily experiences with ethnic hatred within our American republic that if you can make a people 'the other' you can easily make them the enemy.

I remember this absolute ethnic filth from a 1985 Wendy's TV commercial (below).  Attempting to portray the Russia people of the era as backward, unsophisticated - ' the other.' Mikhail Gorbachev is president at the time but there is a portrait of Vladimir Lenin hanging in the background.

As a child of the 1950's I grew up watching the cartoon, Rocky & Bullwinkle that had a ever recurring character, Boris Badenov - said to be modelled after the Russian Tsar Boris Godunov.

His only mission was to come to America and commit acts of violence against Americans - pure evil for evil sake.  Anti-Russian propaganda aimed at the minds of American children. The blatant hatred of all things Russian - the citizenry of the Russian Federation - is currently so out of hand that it's rewarded with all sorts of platforms to peddle this absolute bile (here).

The leadership of Ukraine has known all along that the Russian Federation has no intentions of  invading their country - the very notion is absurd on its face. There is no point in it - and President Kelensky himself has asked the United States to please, "bottle the acid."
Why would the Russian Federation invade Ukraine, to reconstitute a version of the old, moldy Russian empire/or the former failed state known as the USSR/Soviet Union?  The burdens of both previous states are a page in Russian history - I'm certain the thinking is good riddance to both as far as the leadership of the Russian Federation is concerned.
On December 17, 2021,The Russian Federation conveyed its national security concerns in in writing (But, sadly, this should have been done under [then] President Mikhail Gorbachev and Foreign Minister Eduard Shevardnadze back in 1989) and waited patiently for a written response which, in effect, when it was finally delivered to the Russian Foreign Minister by American Ambassador to the Russian Federation, John Sullivan - over a month later, said nothing to the Russian Federation's major concerns (namely, NATO's further military expansion "eastward" and that neither Georgia nor Ukraine be admitted in the NATO fold, and that no current non-nuclear NATO member house nuclear weaponry of any kind provided to it by the United States of America). We don't know its exact wording as it was asked to be kept confidential by the United States.  As yourself, what is the big mystery since so much of this has been played out in the public sphere over the last month by both the Biden administration and the American media?
One nation, the Russian Federation, asks another nation, The United States (lead by war hawks inside and outside of the government apparatus, "horribly stuffed with epithets of war") to address their national security concerns - in writing no less - for all the world to examine, national security concerns that to them threaten their very existence as a nation, as a peaceful people, and the other nation, The United States answers, but, asks that their answers remain confidential for diplomacy sake?
Russian Federation president Vladimir Putin has left the door wide open to direct bilateral talks with Ukrainian President Zelensky to have dialogue regarding Russia-Ukraine relations, but all issues related to the Donbass must go through the Normandy group/or that the Ukraine government must speak directly with the leaderships of the Donetsk region, Denis Pushilin and Leonid Pasechnik of the Luhansk region.  The only solution is the implementation of Minsk II which is supported by the United Nations.  In a recent interview, the Head of the Donesk People's Republic, Denis Pushilin stated he doesn't think that Ukraine will ever implement the Minsk Accords.

Why I'm running for the US Senate;

My quest, if elected, is to go to the U.S. Senate of the republic called, The United States of America, from the state of Nevada, to be a voice of rational thinking to end the belligerence that I see perpetuated by my own government around the world.
To confront my 99 Senate colleagues of both political parties regarding the endless belligerence of aggressive wars that many their seem to have no problem embarking  upon. A nation should not seek to "bloody Vladimir Putin's nose" nor any other world leaders nose (and not expect a bloody nose in return). In regards to the matter of the Russian Federation's national security concerns, my country, The United States, behaves as if it and it alone is to be the final arborator of the Russian Federation's national security concerns.

That's my reason for running [again] for the US Senate - against Catherine Cortez-Masto - to stop these kind of insane statements from our national leadership.  The citizenry of the United States should seek no military confrontation with neither the Russian Federation, The People's Republic of China, The People's Republic of North Korea, the Islamic republic of Iran, nor the nations of Cuba, Venezuela or Nicaragua..

"Mankind must abolish war or war will abolish mankind" - Russell-Einstein Manifesto....for only a complete madman could think a nuclear war between nuclear states is somehow winnable, or survivable.  Such a person or groups of persons who plays in this perverted fantasy of nuclear war between nuclear nations is a nihilist that seeks to end humanity as we know it.
This video (below) on nuclear war is by Owen Brian Toon a professor of atmospheric and oceanic sciences. He is a fellow at the Laboratory for Atmospheric and Space Physics (LASP) at the University of Colorado Boulder.[2] He received an A.B. in physics at the University of California, Berkeley in 1969 and a Ph.D. in physics at Cornell University in 1975 under Carl Sagan. His research interests are in cloud physics, atmospheric chemistry, and radiative transfer.
The military target that Professor Toon speaks of as it would pertain to Nevadans is Nellis Air Force Base - hence the entirety of the Las Vegas Valley populace of approx. 2.3 million human beings has a nuclear bullseye on our backs.
There isn't anything about Ukraine that's worth going to war for, it's being used as a proxy by the United States of America. It's being used by the Biden administration to distract from his multiple failed domestic policies of Build Back Better, the child tax credit, the inability to end the filibuster along with the endless Covid-19 failures - pinning all his hopes on the vaccine being the cure-all needed to end the pandemic - well it isn't the cure-all.
As if President Putin hadn't made the Russian Federation's position clear enough in the In the Dec 17th open letter to the USA & NATO, at a news joint conference with France's President Macron - on Feb 7th, President Putin once again clarified his position on Ukraine joining NATO and its consequences .
The Ukrainian position is [that] Crimea is still part of Ukraine and that it will one day seek to return it to Ukraine from Russia, if such were the case and this is what they honestly believe were they let into NATO under Article 5 of NATO's charter [that] NATO would come to a member state's then taking back Crimea from the Russian Federation by force (which became part of the Russian Federation quite legally) would effectively be invading Russia starting World War III.... hence it's in our interest as Americans to not have Ukraine invited into NATO for this reason alone.