Neo-Nazism on full display in the capital of Ukraine, Kyiv 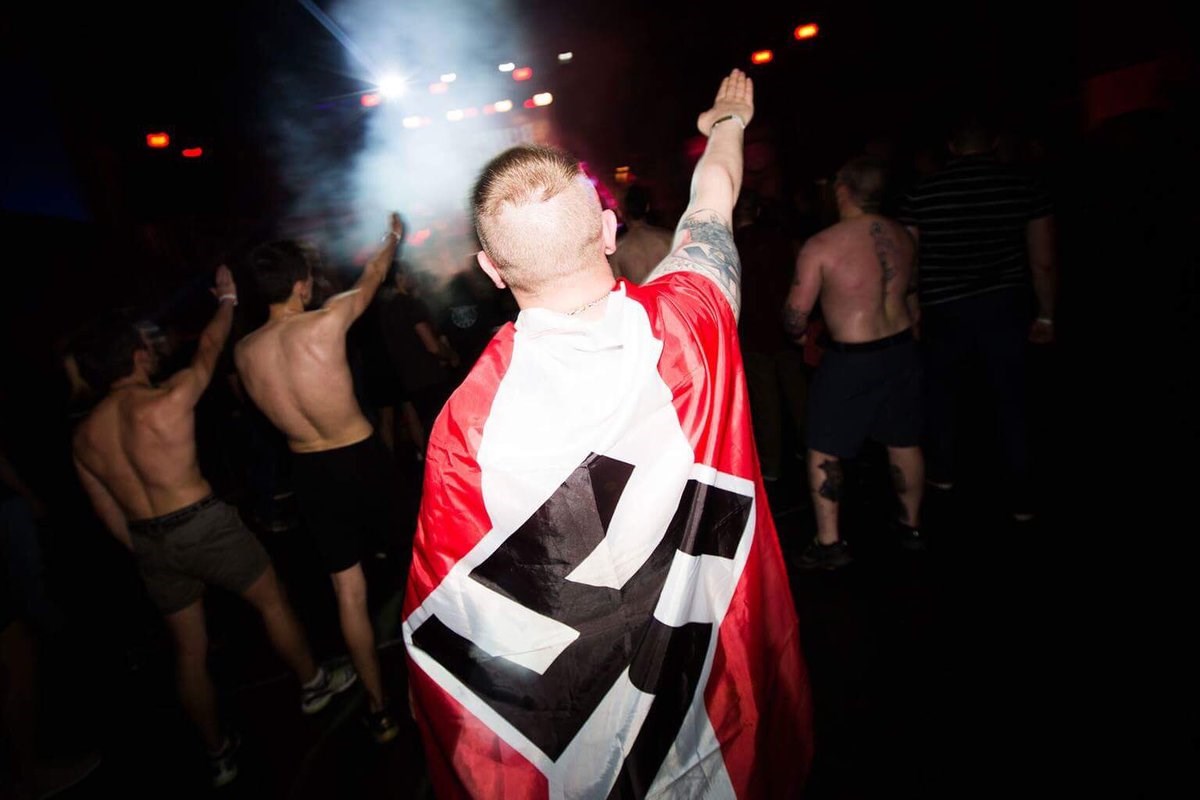 The Organization that is NATO needs to be disbanded (Like the Warsaw Pact was disbanded after to dissolution of the USSR/Soviet Union - 32 years ago). NATO has outlived its usefulness and acts as a world-wide troublemaker - nothing more.

That the nation of my birth, the United States of America, would lecture anyone on belligerence and wars of aggression  eclipses the laughable.

"I think it's a lot of reckless, opportunistic, demagogic politicians in the West who are trying to revise their political careers, using the conflict in Ukraine to elevate themselves." - Dr. George Szamuely, a senior research fellow at the Global Policy Institute.

Being someone who studies geopolitical history as I have, in the history of Russia since the Kyivan Rus' I can tell you that this is just another of the many 'Slavic family feuds'  played out in 2022 - and not the last of many that have happened over the centuries in that region.  They've been at at one another's throat  for OVER 1,000 Years - same song, different day (watch the Youtube videos below).

There isn't a stick, a blade of grass, or a square patch of dirt in all of Ukraine worth fighting World War III (here) (here) (here) (here).
Just one week ago (Feb 28) this fellow (Denis Kireev) was one of the Ukrainian negotiators (sent to Belarus) - today, he's [as] dead as disco, killed by his own government, alleged to have been a Russian spy.  Watching this escalate to the level it has makes me wonder where are the adults on the US/NATO side of the equation?
The entirety of the national government of Ukraine aren't worth a plug nickel.
Currently, you have the last president (Poroshenko) under indictment for treason  - his crime was as president he purchased coal from the DPR to keep Ukrainian citizens from freezing to death.
You have the president before Poroshenko - Yanukovych - who was removed by way of a coup - he's currently in Russia. Likewise the former Prime Minister (Azarov)...along with a few former MP's.  Another current Ukrainian MP is accused of treason.
And this is supposed to be a modern democracy?

In Europe today, you will see elements of the citizenry of many nations play in Neo-Nazism but nowhere will you see a more flagrant display of Neo-Nazism, flaunted publicly than in Ukraine (here).

In the capital of Ukraine, Kiev, you have streets named after two Nazi collaborators .  What does that tell you about Ukrainian society?  This madness didn't start 3 months ago - this started in earnest back in 2014 - 8 years ago.

The events that are currently unfolding can only go so far - in terms of civilian deaths and casualties - as both sides 'profess' to be doing this in protection of the civilian population so it can only get so bad because then both sides lose credibility in front of a world audience.

And, what's making this situation worse is we have embattled leaderships (at home) in three of four countries (with brand new leadership in Germany) at the forefront of the sanctions decision making process desperately trying to use this situation to their political advantage at home.

President Biden's domestic agenda has all but entered into the rigamortis stage - his approval is circling the drain (here) ...... President Macron was in deep doo-doo at home well before covid19 came along, and UK Prime Minister Johnson's own party has given thought to replacing him after his violations and subsequent lies about his violating Covid-19 protocols.  German Chancellor Scholz doesn't want to be seen to be breaking ranks and looking weak having newly arrived as leader of Germany.
Politicians have for decades finding themselves embattled at home seek to rally the nation behind them appearing to be in-charge wartime presidents - such is the case with embattled Biden, Johnson & Macron - tricks of custom.

If Russian Federation President Vladimir Putin is this madman that many claim him to be than placing sanctions said to destroy the Russian economy - and by extension the Russian people - would seem to me to be an extremely cavalier and foolish thing to be doing.

Dangerous rhetoric from the French  that they will "destroy Russia" got greeted by a response from former Russian Federation Prime Minister, President and current Deputy Chairman of Security Council, Medvedev that "economic wars" start "real wars"...."that they [the French] should be careful what they say" .

And finally on the subject of Ukraine how short memory is that after the fall of the Soviet Union left them without a central government operating plan to keep their economy functional their government embarked on dumping massive amounts of munitions in the African continent to watch black people murder one another.... hundreds of thousands of AK-47s were dumped in the African nations and everybody stood back and watch Africans murder one another and never sanctioned Ukraine... all those guns came from Soviet era stockpiles in Ukraine....Victor Bout, who sits in an American prison, war profiteer of the worst kind is often referred to as Russian, well he was born in Tajikistan, which at the time was a republic of the USSR, but his ethnic background is Ukrainian.
The Ukrainian leadership of the era after the fall of the Soviet Union - the two "Leonid's" (Kravchuk and Kuchma) turned a blind eye to Soviet era munitions of every kind being smuggled out of Ukraine and sold on the black market to each and everyone with the money to purchase them (including fake Muslim fanatics)....where was the world's outcry back when Africa was reduced to a battlefield with weapons of destruction provided by the nation of Ukraine - crickets.
To face nuclear annihilation because of a Slavic family feud in Ukraine is insanity on a level unseen in human history.
I seek to walk this madness back, and I'll do so if elected to the US Senate.
Logic, reason is what's needed right now, even if it works slower than guns.

Unfortunately, when men run out of words they reach for guns.........let's get them back [to] talking again.

Update - March 4, 2022:  U.S. Senator calls for the assassination of the President of the Russian Federation, President Vladimir Putin (here).

One can but imagine what the world's reaction would be if the Russian Federation counterpart (Their Federation Council is the same as or Senate (the Senate) were to say publicly that someone needs to assassinate the American President [Joe Biden]?
Just imagine what the reaction around the world would be?
That person would be deemed a complete psychopath.....
I've always known that Senator Lindsey Graham to be unbalanced - whenever an opportunity arises to mask his closet homosexuality (perceived as weakness in a man by many) with bravado he's right on it, " horribly stuffed with with epithets of war".....
This is the sort of crazy talk that makes for a dangerous situation for all of us.
But, thankfully for us, he doesn't sit on any of the committees in the US Senate wherein he could further this kind of outrageous filth in any real way.

Part 2:  How could a military of a nation bomb the civilian population of the Donbass region if they regarded them as their own people?  This is outright war criminal behavior.  It can not be justified under any circumstances.  These two videos show the extent of the devastation committed by Ukrainian side - these are Russian speakers so by definition you know that the devastation that you're watching wasn't committed by Russians.  And in part 2 pay very close attention at 16 minutes and 45 seconds of the video. President Poroshanko talks about them as if they were animals not people.

This is a side of the story that the Western media are not telling.

‘Why is it happening to us?’ Stories from refugees fleeing DPR to Russia (here).