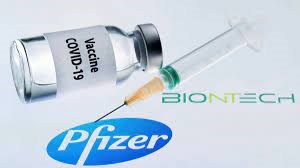 "Knowledge will FOREVER govern ignorance and a people who mean to be their own governors must arm themselves with the strength that knowledge gives."

I'm neither anti-Science nor anti-Vaxxer - that's a person that is stupid to an extreme degree, what I am is a person that does my own research on drug companies and Pfizer has a track record in regards to extremely dangerous drugs that they've put on the market worldwide (or attempted to put on the market) that have had deadly effects on the populace - think Celebrex/Bextra.

The Pfizer people have shown such a malevolent disregard for public safety over the decades that I personally wouldn't use anything manufactured by them.

Those of us old enough to recall back when the Polio vaccine was first introduced [in 1955] it paralyzed & killed many American children  - it wasn't until 2 years later, in 1957 (the year I was born) that both Dr. Jonas Salk and Dr. Albert Sabin came up with a vaccine that did as intended (I took the oral version of Albert Sabin's Polio vaccine and had a negative reaction - albeit mild).

Likewise the measles vaccine which got me really sick, so I come from a place of deep skepticism to all "trial runs" of any vaccines.

There is a movie, The Constant Gardener, that eludes to an incident in Africa (Nigeria) that directly borrows from an actual criminal act committed by Pfizer (from Wikipedia). This criminal act was the first time Pfizer came up on my radar.

The other links below are the deadly effects of the current Covid-19 vaccine manufactured by Pfizer transpiring worldwide - daily.  The most recent dead is a 13 year old American male child who died in his sleep after being given Pfizer's Covid-19 vaccine.

The Pfizer drug Trovan was used in a clinical trial in Kano, Nigeria. The trial compared the new antibiotic (Trovan) against the best treatment available at the time (intravenous ceftriaxone). Eleven children died in the trial: five after taking Trovan and six after taking an older antibiotic used for comparison in the clinical trial. Others suffered blindness, deafness and brain damage, the cause of which is difficult to determine because these disabilities are relatively common outcomes of the disease itself. A panel of medical experts later implicated Pfizer in the incident, concluding the drug had been administered as part of an illegal clinical trial without authorization from the Nigerian government or consent from the children's parents. This led to a lawsuit from the Nigerian government over informed consent.[2][3] Pfizer countered that it met all the necessary regulations.[2] The drug was approved for general use in the US but eventually withdrawn due to hepatotoxicity.