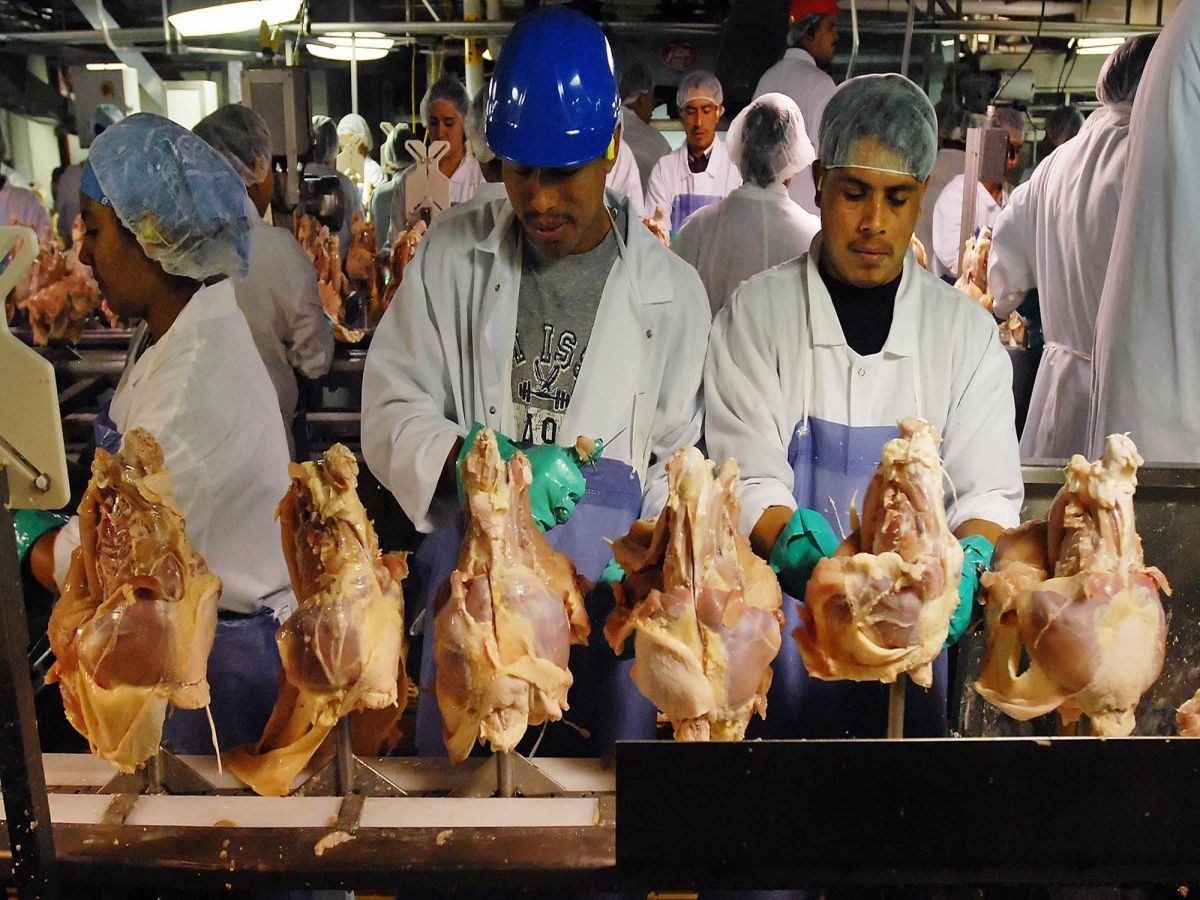 Those doing most of the dying nationwide are brown and black people - and in record numbers.

The vast majority of essential workers in out nations meat processing plants are Latino's - as in the fields putting fruits and vegetables on our tables - keeping all of us alive.

The American ethnic caste system of separating people into ethnic/racial categories in their order of [un]importance has decided that in order to have an unbroken food supply Latino's are to be the ones sacrificed to those ends - sent into certain illness and death for financial gain.

The above photo is life in American meat processing plants throughout the nation - 90% of these workers are Latino women and men.  These facilities are Petri dishes of COVID-19.  Trying to forced Latino's back into these places - into certain misery/death is the height of malevolence.

Where Congresswoman Dina Titus fits into this malevolence:

Congressional District #1, is a "majority-minority district" that is 54% Latino.  Black and Brown people live here together, our children go to the same very low grade schools together, we live in the same crime ridden, food desert that is CD#1. A full 50% of us are renters, not home owners.
We, the citizens of CD#1 replicate thousands of other congressional districts around the nation with the same ethnic demographics.  Were we to vote conjunctive, the two groups would be 100 million people strong.
It's unconscionable how Congresswoman Dina Titus has done zero to improve the lives of what amounts to well over 385,000 Latino's in this district - not to mention the other People of Color who resident in this district.   She's been our representative in D.C., since 2013.
We're in a period in American history that hasn't happened since 1918, when the 1918 Pandemic killed almost 700,000 Americans - and possibly as many as 75 million worldwide.  We see from countless news reports that it's the Black & Brown people who are doing the bulk of the dying from COVID-19.  When they final tabulation from COVID-19 is presented it will be a testament of Americans neglect of the very front line, non-white essential workers who kept the nation going, risking their own lives each and every day, and that of their families who are every bit as essential to this battle as the doctors in nurses risking their lives (many of whom are people of color as well) and after this is over will be compensated accordingly (Hazard pay).
There are 3 bills in the House of Representatives to effective provide every American with $2,000 a month and a possible portal for landlords to obtain all back rent payments, along with much deserved hazard pay ($25,000) - yet, Dina Titus hasn't co-sponsored any of them - when in reality she should have been the very first Congressperson to introduce it being as thought she represents of District that is made up of these expect people those bills are meant to provide for.
Her co-sponsorship is no place to be found on any of them - check for yourselves.  What Dina Titus depends on is that you're too occupied with your survival that you don't have the time or wherewithal to investigate her abysmal voting record.    https://tlaib.house.gov/sites/tlaib.house.gov/files/Recurring%20Direct%20Payments%20Letter__4.20.pdf   &    https://timryan.house.gov/media/press-releases/representatives-tim-ryan-and-ro-khanna-introduce-legislation-send-americans
I've known Congresswoman Titus as a political back-bench do nothing congresswoman, who just phones it in - she shows up to vote after she's told to by the party leaders, but, until that time - she's MIA.
The links are attached below:
When a congressional district of nearly 80% People of Color sends a white person who purposely does nothing for them, year, after year, after year- they send the message to the party elites that they are a people who crave infancy - they are saying they need a white overseer no matter how little that overseer delivers on their social/political needs.
Congresswoman Dina Titus shows the same disdain as do many Republican politicians for Latino's - in fact,  were this another nation, Dina Titus and myself (and you as a Latino) wouldn't be in the same political party for how she has legislated over her 32 years in government, regarding issues pertaining to the betterment of the lives of People of Color - Latino's and black people in particular.
It's well pass time to send Dina Titus back into the private sector where she belongs.  If the links attached don't make that clear to you after you read them, nothing will change your mind - and, you get what you get from her and don't complain - because you said with your vote for her that it didn't matter - that you don't matter.
Congresswoman Dina Titus' ineptitude:
allenrheinhart.com/ubi  allenrheinhart.com/essential-workers  allenrheinhart.com/tituscovid19failures  allenrheinhart.com/titusfamilytree  allenrheinhart.com/titus20yearsinprison

Here you will find of lists of Congresswoman Dina Titus' Billionaire Campaign Donors - I stopped counting after 10.  Clearly she doesn't work for us.