"And the heavens declare the glory of god, and the firmament sheweth his handiwork."

Had someone suggested to me back in 2014-2015 that the Earth was flat I'd have thought of them as very poorly educated person.

Unlike many others who strongly believe the Earth is FLAT - for religious reasons, I have no such inclinations - as I'm religiously unaffiliated. My only interests is in factual information.

I came to the subject of the flatness of the Earth one day while listening to National Public Radio (NPR) and they told what was to be a human interests story.....a [pregnant] woman boarded a plane in Bali (Indonesia) for a non-stop flight to Los Angeles, California, USA.  Several hours into the flight her water broke at 30,000 feet (the alleged location was over the Pacific Ocean) and she delivered a baby (gender unknown).  The human interests part of the story was this child would get to fly on China Airlines for free until they were 18 years of age.

But, it was the details of the story that caught my attention.  I was aware that airplanes make emergency landings for just a few reasons, namely, for unruly passengers - threats to passengers/or the airplane itself from within, and for mechanical and medical emergencies.

This particular incident was classified as a medical emergency, so, for the health & safety of the mother and newborn the pilot decided to make an emergency landing.

If you know (or have a cursory knowledge of the world you live in) you'll know that the flight trajectory from Bali to Los Angeles leaves very few places to make emergency landings once the plane has cleared Indonesia (namely, Papua New Guinea, Midway Island, Guam, and the Hawaiian Islands - with several atolls in-between). This China Airlines flight didn't land in any of those places however, it made its emergency landed in of all places, in Ted Stevens Airport - in Alaska.

I was initially troubled by this, thinking to myself that the NPR announcer had made a simple mistake reading his notes, so, I googled the event. I found the related newspaper article, which I've attached (below).

I spent an entire year of my life fully researching the subject (of the earth being flat) before I was fully convinced that I was indeed on a flat surface - not a round ball hurling through space.  The heliocentric /round earth theory is 'social proof,' it's not a factual/scientific proof - although it masquerades as one.  It's a truth accepted by society based entirely on commonly accepted word of mouth narratives over the last 500 years.  Very few people have done their own independent research on the subject.  Had there been jet flight in the eras of Pythagoras, Copernicus & Galileo - the primary purveyors of this fallacy - the human race would know they're standing on a flat plain that's perfectly still - not circling the sun at all (but is actually the other way around - the sun is circling us as you common sense observes daily).

I have posted just 10 of the proofs that I've researched - which should suffice the most cynical minds (I have 6 others).  To properly research/view the evidence you have to be on a laptop - it can't be accomplished efficiently on your cell phone. This isn't trivia - it a subject that is to be taken in seriously.

If you can't disconnect from what you think you know, from what you were told by adults when you were a 9 years old - leave it alone - don't even bother with it.

Like you, I believed what was told to me as a child by adults without questioning it - and like you, I had no reasons to questioned it.  It's a 500 year old lie - that must be uprooted.  When this fable of the Earth being round came into existence the literacy rate was less then 7%, furthermore, to defy the kings of Europe and the Catholic Church's edicts that the Earth was round by saying otherwise one could (and would) literally be killed for doing so.

That was in 1514, you're not forced to believe what was forcefully imposed in 1514, in 2020.......you're modern, free thinking human beings who can decide for yourselves what is and isn't true.

The Earth is FLAT.

Albert Einstein was once asked, "how does it feel to be the smartest man in the world," he replied, 'I don't know, you should ask Nikola Tesla.' 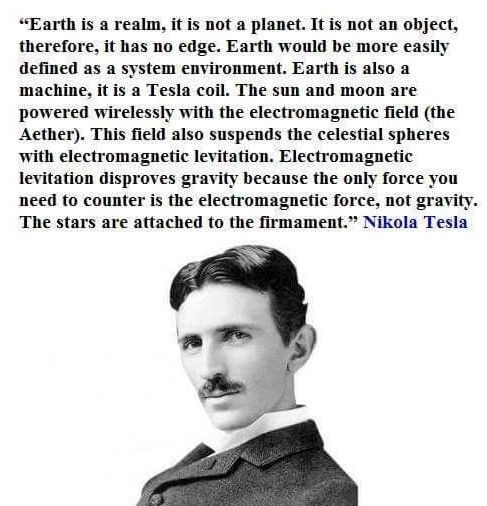 http://maps.library.utoronto.ca/datapub/digital/air_age_1944.jpg (click to enlarge map - the Island of Bali is two islands to the left of "Java" at the top of the map)

The links above are from "google maps," Bali to Los Angeles - you'll see what clearly is an implausible airplane trajectory that would take a airplane to Alaska for an emergency landing - airplanes don't just meander through the skies - airplanes travel in straight lines to their destinations when they are non-stop flights as this flight was.  So, how did a plane travelling from Bali (allegedly over the Pacific Ocean) to North America make an emergency landing in Alaska - some 4 1/2 hours further flying time north of Los Angeles?

Wouldn't have been easier to have gone forward to Los Angeles as opposed to making what amounts to an unexplainable detour 2,200 miles north of Los Angeles to Alaska?

By round Earth cosmology it makes no sense, but, by Flat Earth cosmology is makes all the sense in the world, since travel from Bali to Los Angles in a straight line you'll arrive in Alaska - first.  Alaska was the proper emergency landing location.

Click on the first link below and draw a straight line from Bali to Los Angeles............be reminded, the [Gleason] map is a World War II map used by the military to traverse the Earth (as not to get lost at sea as Amelia Earhart did using a 1937 map of the world).

(Here are 3 Flat Earth maps - however use this first Gleason map for your research - makes it easier than the others which don't enlarge to satisfaction).
http://maps.library.utoronto.ca/datapub/digital/air_age_1944.jpg (when this link fully loads you can click on the map and it will enlarge. Open it and leave it open for your research).
http://imgur.com/BmOZ3ZN
https://www.digitalcommonwealth.org/search/commonwealth:7h149v85z

What I've learned from this whole Flat Earth journey is to not argue the rhetorical as you get no place quickly.  I simply lay out my research based entirely on just two things, international flights that make emergency landings for medical and mechanical emergencies only.

I will post the newspaper articles associated with each incident that I've researched as proof of the flights having actually happened - the point A to point B they were scheduled to traverse through the air and where it actually ended up after the emergency landing(s).

You will surely find that all of them are implausible on a round Earth.

I'll post what I've researched (thus far) and will let you judge for yourselves without commentary.  I hope you approach it as scholarship, not as trivia, which will leave you with, "well, there must be a logical explanation for this" - there is a logical explanation - you're on a flat earth that not moving - at all, you're not circling the sun (it's circling you as you common sense tells you) the Earth hasn't moved one inch and it's flat.

The heliocentric cosmology is that the Earth is a round ball that curves 8 inches per mile, squared of the distance.   So, by this unquestioned logic, the waters of the world curve and cling to exterior of a ball upside down.

Flat Earth no. 2
A plane departs the Persian Gulf nation of Qatar with its destination a mid-west located city (Chicago) but makes an emergency landing in Moscow, Russia.
https://dohanews.co/qatar-airways-us-flight-makes-emergency-landing-in-moscow/
https://goo.gl/maps/pyMh8gx4X6y (Where it was headed)
https://goo.gl/maps/5KQDFZVdcueux15q8 (Where it landed)
http://maps.library.utoronto.ca/datapub/digital/air_age_1944.jpg (click to enlarge map)
Moscow is in a straight line route from Chicago to any Middle East nation on flat earth map, but, impossible routing via globe map.

Zurich, Switzerland to Los Angeles, California - lands in the far north of Canada

On the Gleason's map Switzerland is marked by the "SW" that you see near Italy.

This one sadly is a tragic story of a young child of 9 years old who died on the flight.

I so hate the rhetorical, it gives room to refute clear facts with conjecture. I simply prefer the facts to presented in a clear, concise manner.  Even the music in this video isn't how I'd present this video - but the original of this video without the sound - just the facts has been removed from YouTube.

In accord with the cosmology of the Earth's curvature - 8 inches per mile, squared of the distance - the platform at 9.4 miles should be out of view - 58.93 feet below the horizon.

And, as you witness in this video, the platforms don't go over any horizon on a round Earth, they just leave the ability of our limited human eyesight.  Both platforms are embedded into the sea floor at the exact same levels, which means the sea floor at both distances are the same and the water is perfectly level - when has water been anything but level, water can't curve and adhere to the exterior of anything, it defies the physics of water.  Water is always level.

With but 1 (one) inch of water (look at her feet splashing the water as she steps) what you witness is a mirror effect out to the [optical] horizon of the sky back to the ground.  Were you on a [round] ball Earth, such wouldn't be possible.  https://en.wikipedia.org/wiki/Salar_de_Uyuni

This is a man who happens to be a masterful researcher (however religious his missive at the end of the video) by the name of Eric Dubay.  He's complied 200 proofs that the Earth is Not a Spinning Ball.

I suggest you review them 40 at a time, then stop and reflect on the information before proceeding.  If after you're listened to all of them, over a period of days, if you agree that 50% have credibility, then I've done what I and other like minded people set out to do.

The land masses upon which 7.8 Billion human beings live - is flat, it isn't spinning, it's not moving at all.  Whatever else is here outside of this space we call the Earth I don't even pretend to know. What I do know [is] that the space we call Earth is flat - with the waters of the world being held without by an ice wall called, Antarctica.  Antarctica isn't a continent, it's the ice that surrounds our space called, Earth.

THIS
Lastly, this is the illusionist, David Blaine. I won't bother to go into the details of this stunt, the point is at 23,200 feet (if you fast-forward to 2:42:19 of the video) what you'll see is the horizon is at eye level. Were the earth a round ball he'd be looking down at the horizon - it wouldn't be at eye level - it's impossible for the horizon to be at eye level were the earth a round ball.
Contact Info:
allenrheinhart@gmail.com
http://allenrheinhart.com
https://twitter.com/AllenRheinhart (Twitter doesn't like my politics so they took my account)
https://www.facebook.com/allen.rheinhart
Committee to Elect Allen Rheinhart
Powered by CampaignPartner.com - Political Websites
Close Menu